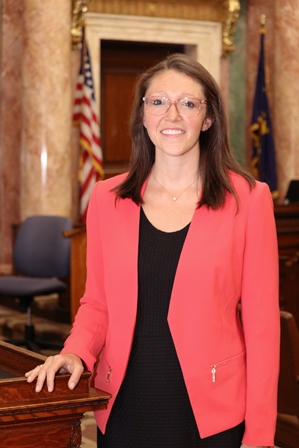 Taylor A. Beaty, an Auburn native and graduate of Ohio Northern University’s Claude W. Pettit College of Law, has been named a Magistrate in the Allen Superior Court Civil Division.

Beaty, 30, is currently an attorney with the law firm of Beckman Lawson LLP. As Magistrate, Beaty will serve in the Court’s Small Claims Division deciding a variety of civil cases, including landlord-tenant issues, protective order requests, contract disputes and other matters.

Beaty is a 2012 graduate of DePauw University and received her juris doctor from Ohio Northern in 2015. In 2014 and 2015, Beaty served as Editor-in-Chief of the Ohio Northern University Law Review. She was admitted to the Indiana Bar in September 2015.

Beaty began her legal career as a law clerk in Allen Superior Court, serving in the Civil Division. While a law clerk, Beaty served as a Judge pro tem, and as a practicing attorney, she has served as Magistrate pro tem in Small Claims on multiple occasions, presiding over trials and protection orders. While at Beckman Lawson, Beaty practiced in litigation and estate planning.

“Taylor Beaty knows Allen Superior Court like few other new Magistrates could,” said Judge Craig J. Bobay, Administrative Judge of Allen Superior Court’s Civil Division. “She has been a part of the Court before, she knows well the job we do and is already highly regarded by the legal community. Taylor will make great contributions to the Court, from day one and for many years to come.”

Beaty is Chair of the Women’s Section of the Allen County Bar Association and a member of the Benjamin Harrison American Inn of Court. She is also a board member of World Ventures Microcredit, Children First Center, Whitington Home and Services, and St. Joseph Hospital, and is active at Grabill Missionary Church.

“Being able to make positive contributions to my community means everything to me,” Beaty said. “This opportunity to help solve problems and resolve disputes is a once-in-a-lifetime chance to do that. I’m grateful for this chance to join the Allen Superior Court bench.”